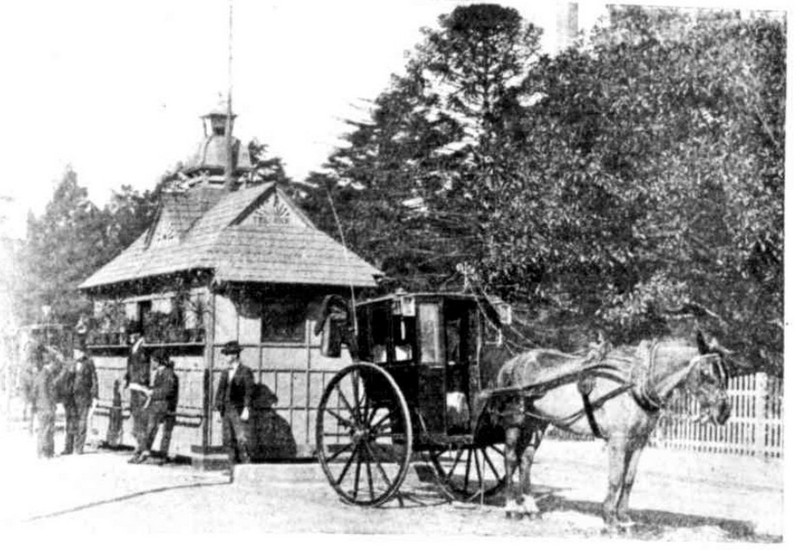 From 'The Weekly Times' of Saturday 21st February 1903

It is all very well and good for me to be critical of the Melbourne Cricket Club (MCC) and their mistreatment of the Cabman's Shelter. However I believe it is time to present some of the fascinating material and images of the horse drawn cabs.

Sadly unsigned or dated is a one page part of a document that someone has penned. If by chance the author is identified, I'll gladly credit him or her.

" Horse drawn cabs were introduced to Melbourne in the late 1840's and by 1849 Collins and Bourke Streets had established cab ranks. At first cabmen drew their vehicles to the kerbside and touted for passengers. As this caused much confusion with pedestrian traffic, the Council (Melbourne City Council) passed a by-law in 1858 compelling cabmen to take their 'stand' in the centre of the roadway. It is thus that they appear in photographs of Melbourne streets in the 1860's.

During this period cab services were generally unsatisfactory and competition for passengers was fierce. Cabmen were rough and often quarrelled with each other and their passengers. Soon, attempts at organisation were made and cab owners and drivers co-operated with local councils to provide proper services that ran to timetables.

Eventually timekeepers were employed and they controlled and dispatched cabs and omnibuses from hexagonal shelters in Bourke St at both the Swanston and Elizabeth Street intersections. With the introduction of cable tramways in the late 1880's, these two shelters and many of the centre-of-the-road cab ranks were displaced. 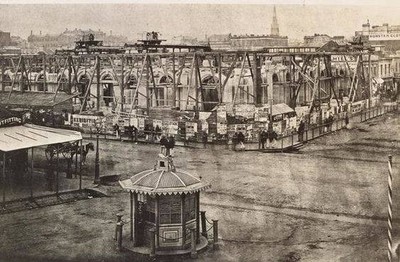 Image of time keepers shelter with GPO under construction 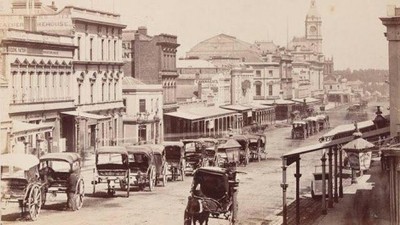 Lets call it 'our' shelter – the one located along Brunton Ave that I'm trying to save from further damage. The Argus of Saturday 9th October 1897 published a letter to The Editor from L.L.Lewis, President of the Cabmen's Union:

Sir, -I shall be thankful if you will permit me through the columns of your journal to make it known that, through the generosity of a well known Melbourne resident, whose name, for the present at any rate is withheld, funds will be provided to erect the first Cabmen's Shelter in this city. I have to-day made known the fact to the town clerk of Melbourne, and have asked him to obtain, at as early a date as possible, the necessary permission to place this shelter on the rank in Parliament place, and as soon as this is granted the building will be commenced.

I take this the earliest opportunity of publicly thanking the generous donor, and trusting that you will find space for the above, - I am, &c.,

I understand the well-known resident was a MP. Sadly Mr Lewis got it wrong – like the MCC have done – by stating the shelter will be sited in Parliament Place.

From all accounts, Thursday 24th February 1898 was an important date on the cabbie calendar. 'The Age' reported:


'SHELTER FOR CABMEN - OPENING OF A MELBOURNE SHED'

The provision of shelter sheds for cabmen while waiting on the ranks has been engaging the attention of a number of gentlemen for some time, Mr. L. L. Lewis, of Melbourne, taking a prominent part. During the past few weeks, plans wore drawn up by Nahum Barnet, architect, and funds were provided by the free gift of an anonymous donor; for the construction of a shelter shed in the vicinity of the cab rank near Parliament House.

Considering its handsome structure the term "shed" seems an anomaly in nomenclature when applied to the shelter erected, which is in the style of a light, airy pavilion. It is the first cab shelter provided in Melbourne, and the committee formed to provide shelters all around the metropolis anticipate the erection of others at no distant date.

The ceremony of opening the shelter was performed, in the presence of large assemblage, including city councilors and other prominent citizens, yesterday, when the Mayor of Melbourne (Sir Malcolm McEacharn) declared the shelter ready for use. He congratulated the rank on now having a place to eat and drink in without being compelled to go to hotels or to feed in their cabs. He hoped to see the shelters rapidly multiplied, and so moved a vote of thanks to tho anonymous donor of the first shelter erected. The motion was carried with cheers. Mr. L. L. Lewis said he did not want it to be thought of as the donor, because this was not the first shelter, which was erected in London in 1875 was a gift, as in this case, the gift of a member of Parliament.

There were now 40 shelters in London, accommodating 3500 cabmen, and there was a fund, provided mostly by subscription, for the maintenance of them. He has asked a number of gentlemen to contribute to a similar fund here, and was glad to say had it met with favorable replies. He wished to publicly thank the donor of this the first shelter in Melbourne. (Cheers.) Mr. John Macguire (a cabman) said that he had been requested by his fellow, drivers to thank the mayor for attending in his official capacity to declare the shelter open.

The cab-men of London comprised men of excellent character, as evidenced by remarks made by the Prince of Wales (??), and the Melbourne cab men also comprised men of excellent character. (Hear, hear.) There were shadows over the great city, however, and one of them was that in using the shelter, they would be rendering themselves liable to prosecution by the police for being away from their cabs. (Laughter.)

It was the same at tho wharf, where drivers had to go away from their cabs to get something to eat. The police, however, generally performed their duty with intelligence, and did not persecute them. (Applause.) The cab men wished the Mayor and all who had contributed to the shelter every prosperity. (Cheers.) The Mayor, in responding, said that although a citizen might feel savage sometimes when asked to pay, say 4s.(shillings), when the legitimate fare was only half a crown (2 shillings and 6 pence), still he believed the public did not grudge the drivers any little extras when they were fairly payable. (Cheers.) Some light refreshments provided in the shelter were partaken of, and the company separated.

Interesting that some of the regulations hinted at (leaving cab unattended on a rank) are still in force today – as this writer knows having been booked while going to the toilet at the airport and when having to go to hospital to get a foreign body removed from eye – in both cases successfully appealed. 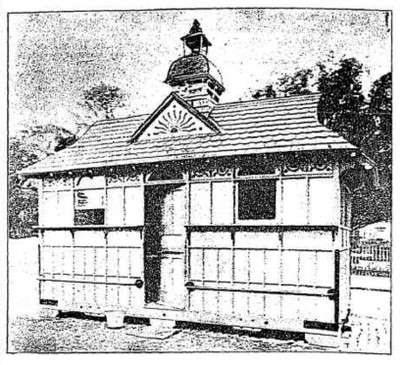 The Argus on Saturday 5th March 1898 published a photo (drawing??) of the shelter

'Our' shelter was the first of about 40 in Melbourne city and suburbs and in many of the country centres in Victoria. Apart from 'our' shelter 2 also survive and are located in South Yarra and Geelong (to be covered in a future blog)

From the excellent resource of TROVE is a entire page of images of cabman's shelters from 'The Weekly Times' of Saturday 21st February 1903 and titled 'A GOOD WORK DONE FOR CABBY'. Sadly the quality of some of the images cannot be reproduced.

I have been able to document from various Melbourne newspaper articles the following locations of cabmens shelters:

Gives a total of 22 documented shelter locations. I would be grateful for any additional information, images – anything that has a cab shelter reference.

Perhaps one of the strangest tales of cabman's shelters comes from a snippet published in many newspapers at the time, including the Kerang (Victoria) New Times on Tuesday 5th December 1905:

Young Way-back, on his first visit to the city, caused much amusement the other day by entering a cabby's shelter in Melbourne and seating himself within. The Jehus (??) looked at the intruder And asked him what he did there. "Waitln' 'for her to start," said he, laconically. "What she?" "This yere tramcar, coorse, stoopld," said the innocent hay seeder. He had mistaken the cosy shelter for the trams, of which he had seen pictures, but never experienced. He was with difficulty persuaded of his mistake. 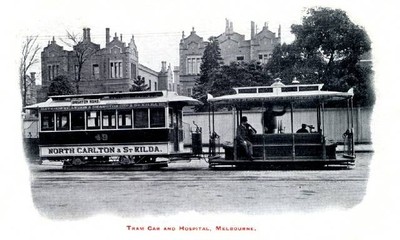 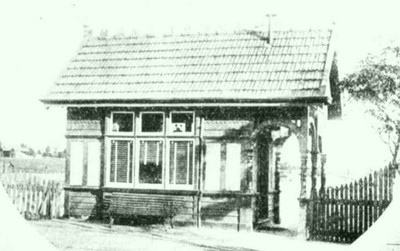 Postcard of a cable car (tram) and an image from 'The Weekly Times' of Saturday 21st February 1903 of the cabman's shelter in Kew. The mistake of that 'young way-back' could almost be the making of a 'Should have gone to SpecSavers' advertisement. 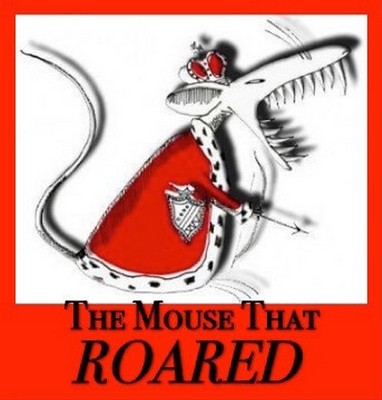 In taking on the might of the MCC, this writer could almost be The Mouse That Roared!(book cover and the title was a very funny Peter Sellers film of the same name)

Previous Next Table of contents

Excellent research. My great great grandfather brought a cab license in 1888 and his son Fred was a cadman until the cab disappeared in 1929.

This blog requires you to be a logged in member of Travellerspoint to place comments.

If you aren't a member of Travellerspoint yet, you can join for free.